One of RACE’s graduates – James Lawton-Smith – had the chance to travel to Sweden to oversee the installation of the pit lids on the European Spallation Source (ESS) project. The ESS will be the world’s most powerful neutron source once complete. The UK is one of 17 European countries involved and construction is expected to finish in 2025. Scientists will use the ESS essentially as a giant microscope, to study a range of materials including plastics, engines, nanotechnology and proteins.

RACE has led the delivery of the ESS Active Cells Facility, including the design of a series of high density concrete lids to cover the different cells where radioactive waste will be stored. Each lid is made of steel reinforced concrete, clad in stainless steel and weighs up to 23 tonnes. 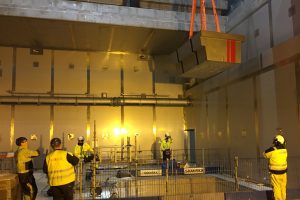 “My particular involvement with this project was with confinement and shielding. These are the parts which cover the active cells and are vital in keeping people safe.

One of the challenges we realised early on was that it would not be possible to build one single piece to cover each pit, as such a component would be too heavy for a crane to move inside the facility. Therefore, we designed several lids – each interlocking with each other – for every area. Each pit has between two and four lids depending on size.

“It was great to see the result of our work. I was there to oversee the installation of the first of the pit lids in what is a huge and significant scientific research project. I was very pleased to have been given such an opportunity this early on in my career at UKAEA.”