Around 100 robotics experts from a wide range of industries gathered at RACE on 28 September for the first “RAS in Challenging Environments” Expo.

Aimed at displaying the latest developments in robotics and remote handling and discussing how the RAS (Robotics & Autonomous Systems) community can work together on common technologies, the event succeeded in both goals, according to RACE Director Rob Buckingham:

“RAS as one of the ‘Eight Great Technologies’ is rightly called a general purpose technology, so it was great to see colleagues and friends from different sectors congregating in one place to discuss the commonality of challenges and solutions.”

Exhibitors and speakers showed how robotics is helping them to work in ‘challenging environments’ from nuclear, deep sea, big science and others. There were also presentations on RAS in transport, manufacturing, smart cities – and on how a common UK RAS strategy could help take the R&D forward to capitalise in this multi-billion pound emerging market.

RACE unveiled two new projects at the event. Firstly, a national facility for independent testing of robotic performance against common industry standards. Based on the well-established model
from the U.S. National Institute of Standards and Technology (NIST), it is the first such benchmarking system for robotic testing in the UK. Specialists from NIST were on hand at the Expo to give demonstrations with drones and mobile robots.

“This is unique to the UK – we’ve worked with NIST to replicate their setup, so companies can conduct standardised tests to assess the performance of a robotic system they’re developing. The tests will cover mobility, dexterity, load-bearing and reliability and will cater for unmanned air and ground vehicles. It is another way in which RACE will support British industry.”

The other project to be highlighted was RACE’s innovative software for controlling multiple robotic devices. Lead Technologist Rob Skilton showed the software in action with live displays during the Expo.

He said: “Many robotic and remote handling systems are a combination of devices, some old and others new, some bespoke and others off-the-shelf, often made by different manufacturers. If each system has its own control software, it makes operations and maintenance more complex – especially in nuclear or other challenging environments.

“Our new software solves this problem by integrating all the devices into one control system, which updates automatically as new components are added. It’s inspired by the JET remote handling system but has lots of potential applications outside fusion – the amount of interest we’ve had at the Expo is encouraging.” 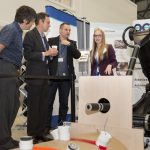 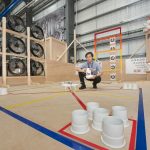