RACE visit to China a chance to talk robotics with students

More than 1,400 students from Chinese universities have heard about the latest technological research and development in robotics and AI from RACE Director Rob Buckingham.

RACE visit to China a chance to talk robotics with students

Rob gave a series of lectures on the significance of robotics in challenging environments with a talk entitled RACE to ZERO: towards Zero Manual Intervention. It formed 2017’s IET Prestige Lecture and stems from Rob’s involvement as a Fellow of the Institution of Engineering and Technology (IET).

The lecture series was held across nine different universities spanning seven cities, with eight lectures delivered during a six-day period. Approximately 1,000 students attended various events in person, while another 420 tuned in via the live online broadcast. 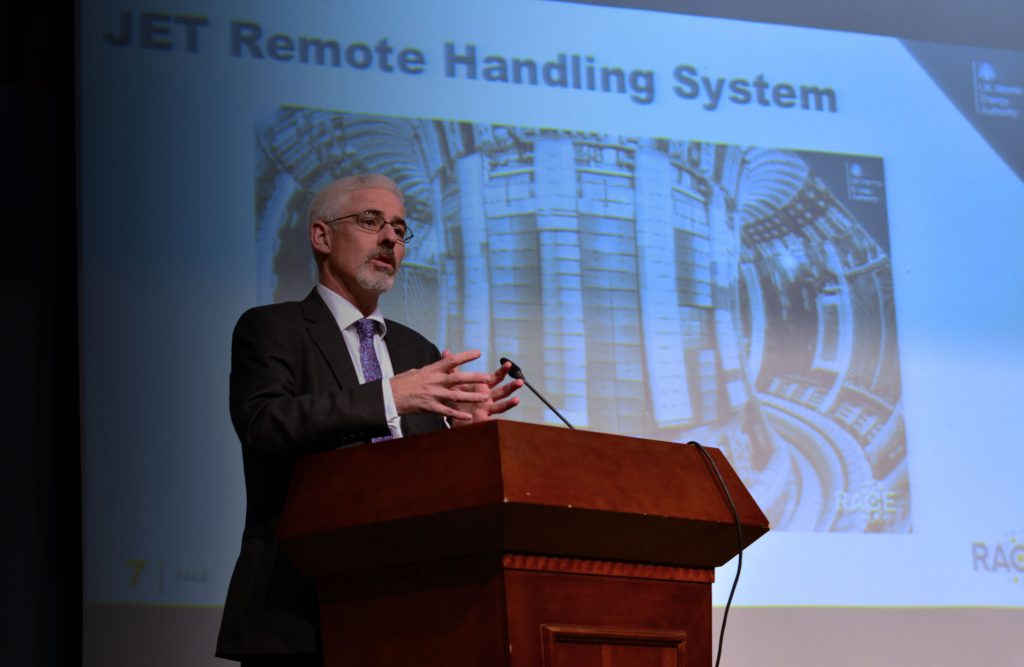 Rob said: “China is developing rapidly. Some of the students were eager to discuss and sometimes disagree with me on topics like the rise and implications of AI. It just shows how highly competitive China already is in the most advanced technologies.

“The intention of the trip was threefold: to raise the profile of both the UKAEA and RACE in China, to get the chance to talk to leading universities about robotics and fusion, and to explore possibilities for collaboration.

“The long-term goal is to build consensus around the need for Zero Manual Intervention. For example, a fusion power plant of the future will be reliant on its remotely operated tools for operation, inspection and maintenance.”

In addition to seven non-fusion audiences, Rob also spoke to the Chinese Academy of Sciences Institute of Plasma Physics (ASIPP) and the Southwestern Institute of Physics (SWIP). Rob is also taking up the role as co-editor of a new IET journal on cyber systems with a Chinese co-editor from Zhejiang University in Hangzhou.

RACE Colleague Rob Skilton also attended. “At most of the universities the talk was highly popular, attracting large numbers of students and researchers” he said. “We had a lot of good questions, showing that the students were thinking deeply about fusion, robotics and AI technologies, and the potential impact on society.”

Chenkun Jin, a PHD Student at Tsinghua University in Beijing, said: “I found Rob’s talk absolutely informative and enlightening for both students and engineers wanting to apply robotics and advanced machine learning algorithms in real-world applications – especially those in challenging environments.”

Renjie Dai, a student at the University of Electronic Science and Technology of China (UESTC), added: “Rob’s lecture provided several cases of breakthrough technology, such as driverless cars and operational problems of nuclear reactors.”